Of course that is my opinion.

Are they the best Les Paul copies?

Being the lover of a good deal that I am, I would say that an argument could be made that the Al-1900 and Al-2500 are some of the best guitars ever made when you consider how little they cost.

Alright, I know that may be a bit of a stretch but hopefully you get what I mean.

If you are looking to really step it up a notch and get a guitar that would be on par, or even above par, of a high end Epiphone Les Paul, maybe like Epiphone’s ultra LP, than take a serious look at the Al-3000 or higher.

Some would argue that the Agile AL-3200 can even give a real Gibson Les Paul a run for its money!

These are premium guitars! 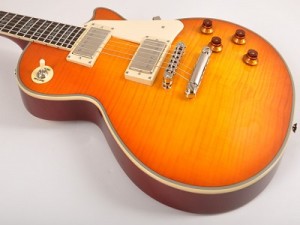 I would venture to say that you would probably have to pay two to three times more for a guitar of this quality that is an Epiphone or Gibson.

So if you can live with a Les Paul copy guitar that doesn’t have the Epiphone or Gibson name on it than you will be extremely happy with an Al-3000.

The Al-3000 is made up of two-piece center jointed solid mahogany.

Instead of the ceramic covered pickups used in the Al-1900 and 2500, Alnico V covered humbucker pickups are used for improved sound.

Like the lower Al’s the guitar comes with two tone and two volume knobs but it also has high voltage pots, brass shafts and 4 conductor wire for even better sound.

Grover 18 to 1 ratio tuners are standard so the guitar stays in tune.

Instead of a 2 piece Canadian Maple the neck is made of one piece Mahogany.

The fingerboard is upgraded from Indian Rosewood to Ebony and the neck inlays are made of Abalone rather than the Mother of Pearl or Pearloid used on the lower models.

The frets on the Al-3000 are the same in size as the lower Al’s (2.7mm) but as an added feature they have been hand filed at the factory.

The nut has also been upgraded from a graphite nut to a bone nut.

As with the other Al’s the truss rod is dual action. The bridge and tail are die cast nickel or gold and the strings are GHS .010 – .046 gauge strings.

The Al-3000 is a solid piece of equipment. I am not in a band but I would definitely think this could be used as a gig guitar.

The Al-3000 is also offered with different neck tapers so if you prefer a slimmer neck or a wider neck than standard you can get that.

In fact you should go practice so your playing will be worthy of such a sweet guitar!

In my opinion, these are the best les paul copies electric guitar.

Stay up to date every time Agile Guitars go on sale! We will give you this free guide on how to turn your AL2000 pickups into Alnico V pickups!

Are looking for electric guitars for beginners?

Are looking for electric guitars for beginners?