The All New Agile Legacy 727

The boys over at Rondo Music have some new models coming out for 2016.  One of them that we are drooling over is the all-new Agile Legacy 727.

By the looks of it Rondo may have this one out of the park for a cheap 7 string guitar for sale. 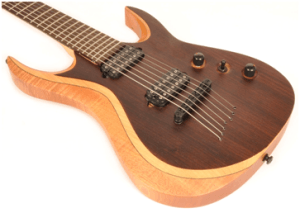 First off the Agile Legacy 727 is an eye catcher.  From the natural finish of the guitar to the bevelled body the guitar is something that is pretty to look at.  It looks kind of sexy and mean all at the same time.

It comes with the same build quality and many features that Agile has become known for.

The Legacy 727 starts off with a solid mahogany arch top body in a double cutaway configuration.  Next up is a 3mm solid maple top.  The neck profile is uniform and has a 13.7” radius.  The neck of the guitar is bolt on.

The fretboard is made of rosewood and the fret position markers are located on the side of the neck to give the fretboard a very clean look.

Check out other Cheap 7 string electric guitars for sale

For hardware the Legacy 727 has an adjustable truss rod in the neck and a Cepheus T-7 wide throw tune-O-matic bridge with graphite saddles.

The pickups on the Agile Guitar are Cepheus passive 7 string humbuckers.

The Legacy 727 is a string thru body design guitar.

The reverse headstock just adds to the sleek look of the guitar in our opinion.

Lastly the guitar is made in South Korea.  We are not sure exactly which factory but we do know that many of the Agile’s are made in the same factory as many other popular brands of guitars.

Obviously the guitar is what caught our eye first.  Let’s face it, even if it is not your cup of tea, it is still pretty to look at.  We also like that it is kind of a new spin on a familiar design that feels like it freshens up the Rondo Music guitar offerings.

After noticing how pretty it is the next notable thing is the price point of this guitar.

The Agile Legacy 727 is only $299 and change.  We haven’t had the chance to play the guitar yet but if it plays as good as it looks then this is a heck of a deal for a cheap 7 string guitar.

We are not sure if Rondo did a small initial production run of this guitar and they all sold already as you can’t find this guitar on the site.  However, we do know of one person who posted shots of this guitar after it was delivered to them so it was for sale at some point.

We hope they do a bigger production run of this guitar as it looks awesome.

Check out the specs HERE.