Has the Guns’n’Roses Reunion Restored Your Faith in Humanity? 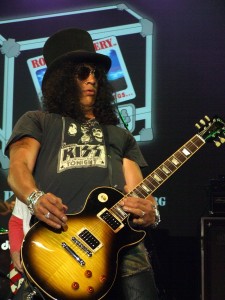 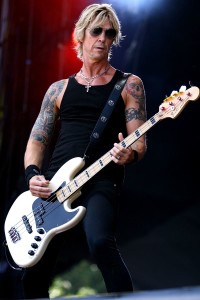 If all it took to restore your faith in humanity was Slash, Axl and Duff of Guns’n’Roses reuniting than you probably got bigger problems.

So if you haven’t heard by now that at least three of the original members of G’n’R are reuniting than you must be living under a rock somewhere.

Yes, it is happening!  A la The Eagles, hell has frozen over for Slash, Axl and Duff and they are, “getting the band back together,” as it were to,  have another go at it and make an absolutely boat load of money doing it!

So for us fans it is of course very exciting.  I was and still am excited for this to happen.  I mean I still love to play lots of those songs from G’n’R’s debut album Appetite for Destruction on my Agile Guitar.

If you haven’t seen the band at their prime than go look for their concert footage from the Ritz circa 1988.  It really doesn’t get any better than that.

Now there is lots of speculation as to which other, if any original or members from the Use Your Illusion days will join the band for upcoming performances in Las Vegas, Coachella and a rumored world tour after that.

With all the excitement it is easy to get caught up in the euphoria of it all.  Slash, Axl and Duff together again running around the stage delivering a rock experience for the ages.  However, it’s been over 20 years since the band was in their prime and have you seen Axl Rose lately?

It’s so sad that Father Time get’s us all but it is inescapable.  This isn’t meant to be digs at any of the guys but rather to temper some of the excitement out there with a does of reality.  We all get older and so have they.  I am just afraid that some people are going to be disappointed because expectations are just too high.

Slash’s agile guitar skills are as on point as ever.  The guy still shreds and is still probably one of the most influential rock guitarists alive today.  Since his G’n’R days Slash has been busy with his own projects and most notably, probably had the most commercial success with Duff in their former band Velvet Revolver.

Slash really is a sort of pillar in the rock’n’roll world.  He probably deserves some kind of lifetime achievement award already.  Yes he looks older but still actually looks pretty good for his age and can still deliver the goods on stage with a good amount of energy.  I don’t expect him to be running around like he used to but he still will rock.

Axl actually may be the weak link in this whole thing.  Notorius for showing up late to his own concerts it will be interesting to see if he will be more professional about starting shows on time.  I get it, he’s a rockstar and it is all part of the schtick but the guy is in his 50’s and lots of the fans are too, and some of us have to work in the morning!

Axl looks to have taken the least care of himself over the years.  This is just an observation and the man can do what he wants but it does make one wonder if he can still deliver on stage.  Looking through many concert videos of recent years online it looks like Axl’s voice could be hit or miss.  You always had to wonder with his style of singing how long his voice could hold out.

Looking at footage from over the last 8 years of Axl singing some years it is obvious he still has it and still deliver that raspy voice.  However looking at more footage from recent years it seemed as if his voice was totally shot.  Hopefully he will have ample time to at the very least get his voice where it needs to be.

Duff is hands down in the best shape of the three.  The guy looks fantastic and I can only hope I look like him when I am his age, minus all the internal organ damage from years of drinking!

Duff also has been very busy since leaving G’n’R getting a degree in finance, writing books and staying involved in multiple bands including Velvet Revolver.

Hey how many of you after hearing Fall to Pieces for the first time thought, “Wow , that’s a Guns song and that would sound so good if Axl was singing it”.

It’s funny how Duff and Slash seemed to almost benefit as people by departing from G’n’R.  It’s like they really evolved and grew as people and professionals that would have never been possible if they had stayed.

It is a weird thing to say but it almost seems as if Axl kind of got stuck or stunted by staying in Guns or continuing to use the name for his band.  I wonder if I would feel differently about that if he had done what he had the last 20 years away from the shadow of the G’n’R name and kept it kind of sacred for lack of a better word.

At any rate, it’s all water under the bridge.  For now we get to wait with anticipation at what kind of show these guys will be able to deliver.  There will be great moments for sure and it will be fun to sit back and enjoy it.

It’s been a long time coming!

Looking for a Cheap Telecaster Guitar?

Looking for a Cheap Telecaster Guitar?