“That’s a Cold Shot Babe”, is a great song.  Stevie Ray Vaughn, or SRV, is a great guitarist.  He took Jimmy Hendrix’s “Little Wing” and took it to a whole other level.  SRV is a guitar legend.  It’s impossible to pick just one guy as the greatest guitarist of all time.  Rather there are a number of guitarists that can be considered the cream of the crop.  SRV, however truly can be considered one of the best guitarists of all time for the style he played, blues.

These Guitars Will Change Your Life! Cheap Guitars For Sale

It would be hard to come up with somebody that is a better guitarist than Stevie Ray Vaughn in the style he plays.  The guy had an absolute gift and his playing was just sublime.  We could sit there watching video’s of Stevie playing forever.   Sadly, that is the only way you are going to see Stevie play these days.  He was taken from the guitar world way too soon. 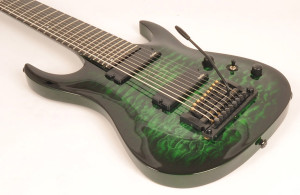 He started to play the guitar at seven.  This is one of those stories where the younger brother wants to become better at something than the older brother.  Stevie’s brother Jimmie Vaughn was the first to learn guitar and Stevie soon followed in his brother’s footsteps.

Stevie’s career as a mainstream guitarists was cut short when he was killed in a helicopter crash in 1990 at age 35.  The guitar world has never seen another the likes of Stevie Ray Vaughn since.

Stevie didn’t use many effects to achieve his signature sound but instead used combinations of different amplifiers to get his sound.

His guitar is probably as famous as he is.  Of course when one thinks of Stevie Ray Vaughn one thinks of the Fender Stratocaster.  ‘Number One’ is what Stevie referred to his main guitar as.  This was a 59 Stratocaster that was pretty beat up.  He also had another beat up Strat that he called “Lenny” which his wife bought for him from a pawn shop.

Stevie struggled with substance abuse for part of his life but was able to overcome his struggle with addiction in the 80s and this is what allowed him to really become successful as a guitarist.  Check out the video to see some of Stevie’s great playing during a sound check for one of his shows.

Don’t forget to check out the Agile Guitars!

5 Reasons Why Your Guitar Is An Extension Of You

5 Reasons Why Your Guitar Is An Extension Of You