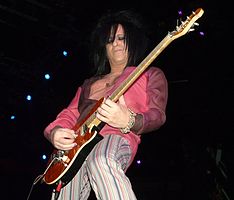 He has been providing hot licks and screaming solos for Billy Idol for years.  Heck he even fronted for Vince Neil during that time Motley Crue was on hiatus. He has also collaborated with Sebastien Bach, Michael Jackson and Robert Palmer.  Steve Stevens is one of the great guitarists of the last 30 years.  He has played on all of the classic Billy Idol tunes we know and love.

Billy Idol has many rock anthems in his catalogue of work.  There are songs like Rebel Yell, Flesh for Fantasy, Eyes Without a Face and White Wedding.  These are all Billy Idol and incidentally all showcase some of Steve Stevens greatest guitar work.

Steve Stevens is a rocker! Do you love the Top Gun anthem?  Well guess who playing the guitar on that song.  You guessed it…Steve Stevens!

If you have ever listened to many of Billy Idol’s songs you hear lots of sounds in them that you think are not guitar like for instance Eyes Without a Face.  For the longest time I swore that they must have used synthesizers for many of the chord progressions.  However, after watching some interviews with Steve Stevens I actually found out that he plays all of those parts on his guitar!

Reviews and Info on Quality and Affordable Agile Guitars

Of course he has a special guitar to make the sounds but it is very cool.  One of the other “how’d he do that,” questions that people have about Billy Idol songs is how did they make that ray gun sound in Rebel Yell?

Well, you say, he probably used a ray gun!  If you said that you would be right and wrong.  You would be wrong in the sense that he did not use a ray gun on the actual original recording.  The original effect on the recording was done through a series of complicated effects according to Stevens himself, that were very hard to replicate for live performances.

Now it’s not quite as simple as just holding a ray gun up to your guitar and pulling the trigger.  In fact, Stevens apparently does some modifications to the electronics of the ray guns he uses to get the proper ray gun sound effect for the song.  Check out the video below to see how he does it!

Do You Need To Pay For Guitar Lessons?

Do You Need To Pay For Guitar Lessons?